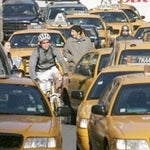 Routine Domestic Dispute Leads to Arrest, But Not to Extended Suspension

Even minor domestic disputes can lead to arrests. While such charges rarely result in convictions, the TLC still routinely argues that drivers should remain suspended not just briefly, but for months while criminal charges are pending. Taxi & Limousine Comm'n v. Lei, OATH Index No. 790/22 (Nov. 1...

Landlord-Tenant Dispute and Criminal Mischief Does not Merit Continued Suspension

In Taxi & Limousine Comm'n v. Anthony, OATH Index No. 715/22 (Nov. 22, 2021), an Uber driver was suspended after being arrested on a charge of criminal mischief, which sounds rather innocent, but is actually a low level felony. The charge arose from a dispute between housemates. One roommate dema...

ALJ urged reinstatement, concluding that the driver’s testimony was consistent, detailed and corroborated.

Accidental Assault no Reason to Suspend

ALJ finds assault was an accident and true remorse

OATH recommends reinstatement of cabbie who is also a veterinarian

OATH judge recommended reinstatement following a suspension based on an arrest for a high level drug charge.

Driver Who was Defending Himself Reinstated

Driver Reinstated Based on testimony he acted in self defense

Doubts about Driver's Honesty Leads to Upholding of Suspension

Despite Charge by Passenger, a Driver is reinstated

In Taxi & Limousine Comm'n v. Zagre, a driver was arrested after being accused of assault by a passenger and was then suspended by the TLC. This kind of scenario seems to be the worst for a driver. Still, OATH recommended reinstatement based on credible evidence showing that it was the driver who...